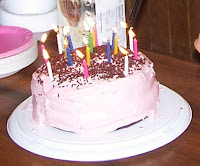 We celebrated the youngest DD's birthday yesterday with family. She turns 17 yrs old on Friday, Aug 1. Where has the time gone?
It is tradition for this child/young adult to bake her own birthday cake. She looks forward to baking her own cake.
This year she made a two layer cake. The bottom layer was chocolate and the top layer was vanilla tinted pink. She put a chocolate filling between the layers and topped it with buttercream frosting and chocolate sprinkles. It was very tasty. 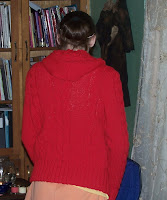 Much to her surprise, she received her CPH off the needles and finished. I had this blocked and ready to be wrapped two days prior to her birthday party. She thought I was making it for her sister and prompted me to cast on for her CPH. So I had to dig out pink wool and appear to be casting on for another CPH.
She loves it.

I also found clear Skechers for her and me. I got a bargain with these. They were on sale for $15.00 and if you typed in a code they were only $10.00 each with free shipping. My kind of shoes. Believe it or not they are very comfy. I was a bit surprised.
They really show off the handknitted socks. I had another pair of socks on the move for her (imagine that?) but they didn't make it off the needles. I knew she liked these so I gave them to her.
She loved them too.
She also received Space books, Planet earth game and some scrapbooking stuff. (she's big into space)

I woke up this morning to a note from her sitting by the coffee maker. The note said, "thank you mom for a wonderful and fun birthday." What a nice surprise!
Posted by gypsyknits at 7:35 AM

gypsyknits
This blog is a rambling of my life living with my husband, a few furry friends, my ENORMOUS yarn stash and occasional ramblings of other sorts. We have a sprinkling of family members. "A man is only as good as his word."

View my complete profile
"There is no such thing as 'part-Cherokee.' Either you're Cherokee or you're not.
It isn't the quantity of Cherokee blood in your veins that is important, but the quality of
it . . . your pride in it. I have seen full-bloods who have virtually no idea of the great
legacy entrusted to their care. Yet, I have seen people with as little as 1/500th blood
quantum who inspire the spirits of their ancestors because they make being Cherokee a
proud part of a their everyday life."
~Jim Pell: Chief of Cherokee